I just returned from the SIOR European Conference in Warsaw, Poland. It’s my third visit to Europe recently and the most persistent trend is the expansion of big warehouse development. It’s leading to opportunities for U.S. occupiers and investors mainly due to the strength of the dollar.

I saw Professor Richard Baldwin, a leading expert on the influence of the Internet and communications technology on trade and production. Industries arbitrage labor, capital, and technology across national boundaries to find the best profitable balance. New communication technologies for example, tele-presence, will make physical collaboration possible while being thousands of miles apart. This will open up markets and allow for input substitutions to combat tariffs.

I learned that dealing in Europe is not much different than in the United States. Cap Rates have the same relative spreads from primary markets to secondary. Below 5% in Paris, Madrid and Germany. Rising in Central Europe until reaching Moscow above 10%. In many of the strongest markets, it’s essential to add value to overcome low returns.

In Europe partly, but particularly in the U.S., we see mispricing in B and C markets. There is not enough consideration being paid to risk from tenant quality, short leases, and building conditions. Historical spreads between A and B are 200 to 500 basis points. Today that spread has compressed to 50 to 200 basis points. Space Scarcity, Excess Liquidity and the end of Quantitative Easing are the culprits. Smart buyers are returning to more conservative underwriting to make sure they are being compensated for conventional risks.

Logistics and Supply Chain closely resemble the U.S. by building to scale and establishing large ecommerce buildings that supply last mile destinations and production components. Development opportunities are similar where land is controlled long term and development for occupiers creates the value. Many European developers, especially in Central Europe, have large holdings in entitled industrial land but need valuable occupiers to capitalize.

Political Risk, something the Europeans know much better than Americans, is an important aspect. Because of almost universal transparency throughout Europe, political risk has so far been muted but there is still a premium that can be earned by having the right local partners and keeping a low, fixed investment mostly in the land. Corporate credits and a robust occupier market contributes to stability. Because of the strong dollar, purchasing power leads to discounts of 25 to 50 percent.

As in the United States, access to labor is a primary factor in location decisions. There is currently a mismatch between capital and labor. Capital prefers major markets, but industry wants to locate further out where labor availability and wages are lower. This is another opportunity for private capital to earn a calculated premium.

The current World Cup is the correct metaphor for our times. While countries will rival each other on the playing field, it’s the close personal relationships I have with my European SIOR colleagues that will overcome investment and location risks. As many of our clients enter the next phase of global convergence, more frequent communication with my SIOR peers will continue to be the source of many deals. 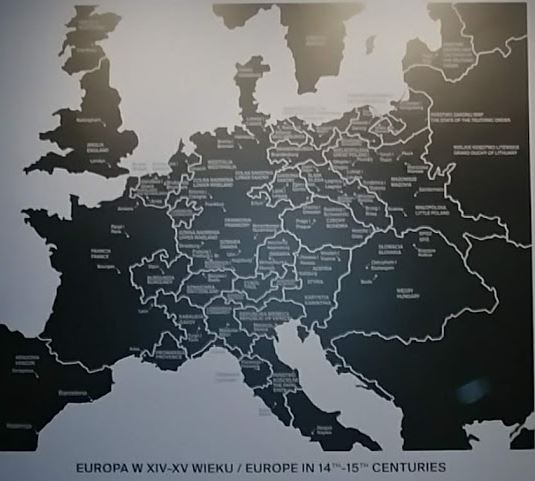 (Wish I had a better map but shows the influence of regional differences more than national. From the wall at the Polish National Museum in Warsaw, Medieval collection)