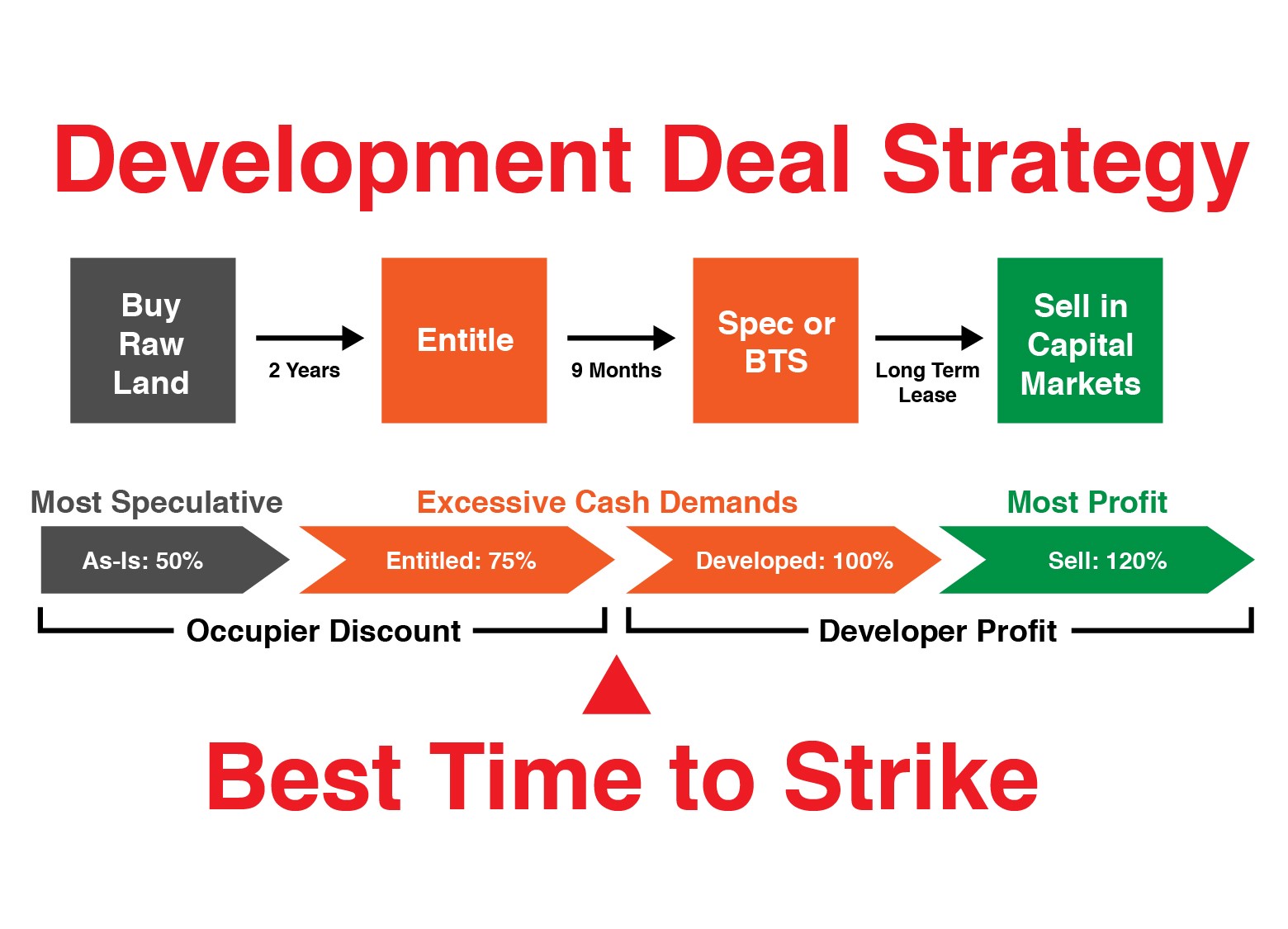 The current cycle is being propelled by three major conditions: Space Scarcity, Capital Markets Pressure and Rent Surge. Market dynamics are still very favorable for development and will only be disrupted if demand begins to weaken. Otherwise, strong fundamentals are the prevalent condition in most major U.S. markets.

Space Scarcity is an affliction felt in urban, infill industrial markets across the United States. There is a short supply of Class-A industrial space at central locations. With high cube warehouses and superior loading being a minimum requirement for running a modern distribution business, Occupiers either need to pay up for central locations or move to the exurb where land is available. While it’s a tricky balance choosing between centrality and quality space, both Developers and Occupiers continue to push outwards for new development.

Capital Markets Pressure is exemplified by too much money chasing too few deals. In addition, finance for industrial real estate has changed. Although there is a lot of money looking for deals, the bulk of it goes to a select few. Investment conditions are excellent with historic spreads between interest rates and yields. New industrial building remains profitable with market pricing comfortably in excess of development costs. This distortion is partially caused by a regime of artificially low interest rates and Space Scarcity. In this environment, premium prices and generous loan terms are commonly obtainable for long term, credit leases. The influx of foreign capital, industry consolidation, and increasing portfolio values are all related to the competition of capital.

Rent Surge is the driving force behind good investments. Because of Space Scarcity, rents are advancing at one of its fastest clips ever, greatly exceeding inflation. Firstly, low rents made at the depth of the recession are rolling over at large increases. But Space Scarcity is the larger contributor because when there is nothing available, Landlords have unprecedented power to set new rates. While this trend has already been playing out with some frequency, there are still many pockets with room to grow.

These three conditions are driving business. Space Scarcity is causing many companies to move to the exurb for new development. Many parts of the U.S. are seeing the same thing whether it’s the Inland Empire, Central California, South Dallas, or Exit 8A off the New Jersey Turnpike, they have all become regional distribution centers attracting companies leaving the largest metros. One of my primary business goals is to show Occupiers how critically important their occupancy is to the economic success of new development. There are particular ways to structure a deal that can have outsize financial benefits. Conceptually, it’s fairly easy to understand, but very difficult to pull off because it takes skill and market knowledge. Great deals are made by leveraging the Occupier’s long term occupancy against development risk. To be able to do this anywhere in the U.S. is a special attribute.

Working with Occupiers has a beneficial spillover effect on Developers and Land Owners because they can also profit with a sophisticated Occupier-in-Tow. While building Spec will result in higher profits if the timing is right, many developers appreciate having a sure thing as long as they are being compensated for their capital, risk and expertise. The same logic applies to Land Owners. All things being equal, having the Occupier-in-Tow, substantially removes the risk of default and results in more profit for everyone. 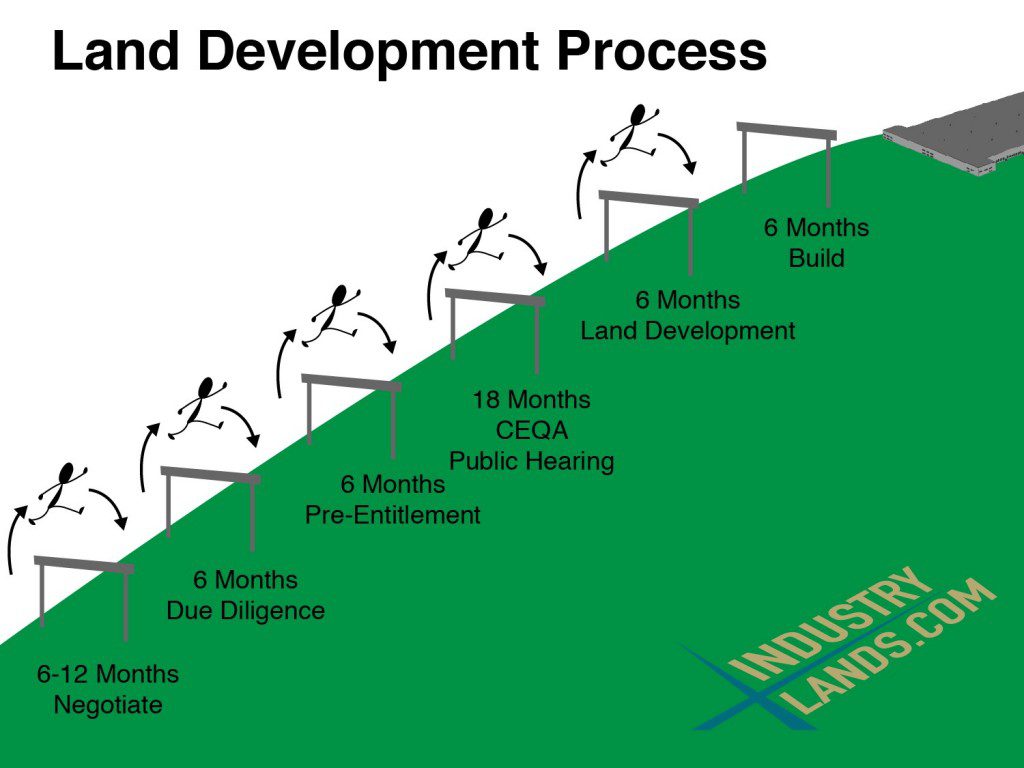 Investors are delighted to have a long term lease in hand. It drives down the cost of financing and reduces cash outlays. The Occupier-in-Tow and the surety of cash flow is the important component to obtaining the best funding. Many of the best lenders will not take leasing or vacancy risk but as soon as the lease is in place, capital becomes more competitive with a sure thing. Occupiers with multiple locations have been able to receive lucrative portfolio valuations by creating a separate real estate entity based solely on their own occupancies. The business is made by connecting Occupiers with Real Estate Capital; Big Industrial is the vehicle.

Besides new development, Space Scarcity, Capital Markets Pressure, and Rent Surge have a corollary effect in infill, metro locations. For instance, in Gardena, just like many infill markets across the U.S., Rent Surge is creating profits. Firstly, leases made at the depth of the recession are starting to turn over at large increases. But Space Scarcity is the more effective influence because with nothing available, Landlords have unprecedented power to set new rates. While Rent Surge is causing many Occupiers to move, it also greatly benefits owners of centrally located property, no matter the age. This is a clear case where developers are being rewarded for refurbishing and re-leasing close-in industrial. Many of these smaller and older properties are not institutional quality but because of their locations, have considerable upside. The biggest barrier is access to capital.

Private investment groups have the most impact on infill because deal size is smaller and conventional lenders are too onerous. These developers tend to raise money the hard way – one investor at a time. The investment groups are normally led by a market insider and apply a strategy, as explained above, to infill markets. They create deals with the Occupier in hand and take risk where there are strong fundamentals. Properties with extra land or expensive tenant improvements tend to retain longer occupancies. This is how we do deals in Gardena.

In our business, we receive support from four major areas. Investments in our technology platform, called MAPP and described elsewhere, gives us superior market analytics and allows us to deal in the entire universe of Big Industrial. Our relationships with SIOR brokers, due to decades of personal contributions to the organization, gives us the generous cooperation of the best brokers in every major U.S. and International market. We recently staffed up our hiring both on a junior and senior level so we can keep up with the new business. Finally, it’s our clients that deserve the most thanks because of the confidence they give us to innovate with markets, techniques and technologies.

What can change the momentum? A slackening in demand from low growth and global weakening is the biggest threat. Interest rate increases, of course. But as things stand today, there are profits to be made because market dynamics are still dominated by Space Scarcity, Rent Surge and Capital Markets Pressure.