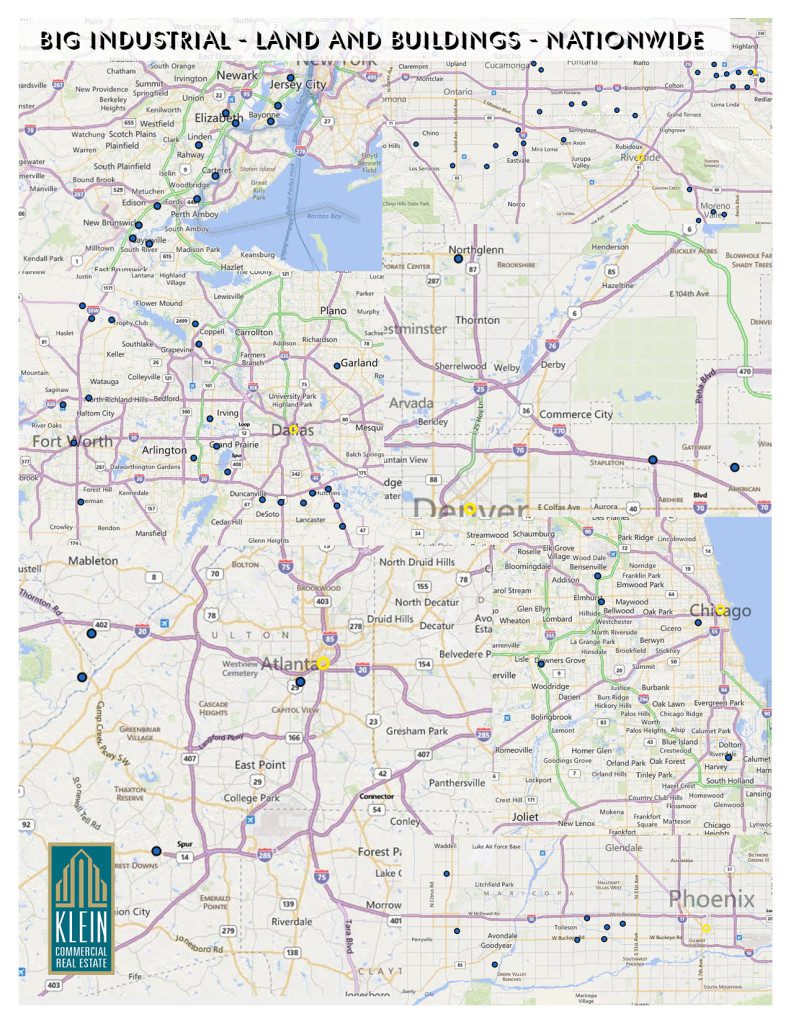 Over the past year I have had the privilege of interviewing many of the top dealmakers in the industry. I moderated 3 panels and got to know many of the panelists individually. The dealmakers are mostly Senior Vice Presidents, Chief Executive Officers, or Chairmen from the top industrial REITS and national development companies. I pre-interviewed everyone and this is where I learned the most. I also had great personal interactions at the conferences and met many more developers in high places.

On a personal level, this series of conferences coincides in a renewal of land activity which is a Klein specialty. All of a sudden, I am working on the largest industrial land deals with the biggest developers all across the country. It helps that I sunk some investment dollar in a GIS program that I call MAPP. I can find big industrial, on-and-off market, almost anywhere in the U.S and this gives me a competitive advantage.

What are the big investors and developers thinking?

Since the outset of the economic recovery, there has been a focus on big buildings. Besides Amazon, it was consumer products moving to large, new distribution centers as they look 10 years ahead. Almost all left congested and older buildings from the inner ring to locations fifty miles out for better regional dynamics and super-functional buildings. Many of the panelists thought that movement was well on its way to completion and more organic growth from smaller companies will take hold. One developer proclaimed 2016, the year of the smaller building.

Money, and there is plenty of it, drives many of the decisions and part of the excess. Developers go where the capital wants to be. So far, it’s been in service of major metropolitan areas. Wherever GDP and population is growing, it is likely you will see new industrial being built. Not every developer has a tenant and there is a tendency for everyone to go in at the same time when the green signal starts blinking. So far demand has been steady so there is no pronounced oversupply. All developers look carefully at local market dynamics and also watch timed deliveries.

In one notable transition, a year ago private developers agreed there were certain risk adjusted awards that favored build-to-suit over spec. Having someone in hand overrode the leasing risks of a vacant building. Now a year later, with solid demand, spec construction is a risk worth taking and is a favored activity over build-to-suit. Still, paying attention to when the music stops is on everyone’s mind.

While cap rates are at all-time historical lows on a nominal basis. In terms of spread, they are at all-time highs. Pensioners won’t recognize the difference in their monthly checks unless they are invested in the real estate funds. Developers however are taking advantage of the difference between interest rates and returns. In addition, those who are able to attract sovereigns and wealthy families to their investment vehicle are able to underwrite over longer time horizons. This is generally an advantage. In additions, no committees, no lenders, and fast action is a critical difference. It’s not necessarily having access to capital, but what type of capital is it?

Platforms are also in the news because of recent buyouts among large real estate owners and brokers, both. The question that seems to get the most attention is how the platform is valued in excess of the real estate. It sounds a lot similar to what was called enterprise value before the recession. If you have good people, a plan, and access to capital then there is a valuable platform in place to create more value. At that same time, the acquirer can just as easily make the case, it’s overhead to be cut, which many are doing.

Platform and strategy is not widely discussed but it’s clear from talking to people on the inside it’s the defining ingredient when raising money and differentiating among the completion. When I talk to the sales staff, they repeat the benefits of working the platform. The leaders bring a lower cost of management and operation while the bloated businesses are being cut. Low fees will get the attention of investors. The CALPERS announcement to cut the number of fund managers and the criticism of hedge funds in general is indicative of a movement to lower fees. The result will be more money going to fewer, better run funds, REITs and developers partly, through wholly owned subsidiaries of the investors themselves.

There are several areas to exploit. The smaller building market is wide open. Only a few companies have really taken advantage of buildings 200,000 Square feet and smaller. Firstly, there is so much money available, investing in bigger buildings is a much faster way to deploy large capital chunks. Smaller buildings also receive competition from Users and requires more management. As yields continue to be competitive, leaner operators will find smaller buildings as more viable and will be able to operate the properties in a more distributed fashion without having to house an expensive staff.

Private investors are also an untapped market. There is a tremendous amount of closely held companies who own a lot of industrial real estate. Some is related directly to the businesses they own and run. Other is generational wealth or self-made fortunes. For private companies that have operating businesses, buying your own real estate is clear. For those who operate in a big way, they have the power and clout to do deals as good as the developers can do. The owned real estate becomes a profitable venture in itself and can have an entire, separate valuation in addition to the business.

For plain, old wealthy investors, the learning curve is steep. Unless you have gargantuan resources it’s hard to command much personal attention. You’ll tend to see warmed over offerings and leased corners in the NNN world. At the high end you’ll simply be outbid by the professional investors. While the rich have the money, unless they can get access to on-the-street knowledge and the tenants in play, their best avenue is to find a general partner who can run the investment for low fees.

In answer to the question I asked all year, Where are the Deals? It turns out they are all around us and this is not my answer. The availability of capital, the reinforcement of slow, but continued growth, and a lack of bank financing means that rewards go to the connected and the knowledgeable. So far all the new industrial stock has been in big buildings, and even then in selected markets. Many tenants crave ownership and they are willing to agree to long term leases. Older owners, who have hung on through the worst, are ready to sell under clearer skies. Seeing and taking advantage of the multitude of opportunities is where the deals are today.