As I was driving around Dallas last month looking at Big Industrial there was news that Amazon was about to offer-one hour delivery to selected zip codes. Dallas Morning News has a good story with the reasoning behind it. The important part for real estate location is how Amazon and others like them pick their zip codes for the roll out of the new service. Density is the primary factor. If you are 40 minutes away from the densest areas with multi-story housing, you can’t make too big a mistake. Other location criteria is still experimental, as-is many of the theories behind ecommerce location. If one-day service is successful, there will be many corollary locations in other cities. Real estate people like myself are watching the ecommerce evolution carefully.

One good book that explains location strategy for ecommerce is a newly published work by David R. Bell, Location is (Still) Everything: The Surprising Influence of the Real World on How We Search, Shop, and Sell in the Virtual One. Besides density there are additional characteristics about people that can help companies target customers partially seen behind the lens of behavioral economics. For instance, by taste preference. If the goal is delivery and service, social preferences will influence location. For instance, Stumptown coffee might want to be closer to the hipster parts of town. Or diaper delivery to where the infants are. Or Cabelas’s near their customer base of hunters. These same clusters work from city-to-city. Ecommerce companies are experimenting with a host of algorithms and analytics that measures their best locations. But none as simple as the value of being close to the densest populations with spending power. As companies specialize, they look for other specific categories. Many of the same location theories that apply in the off-line world, also apply on-line. As stated in the book, “You can’t succeed in the virtual world unless you understand where and how your potential customers are situated in the real one”

Location strategy differs among one-hour, same day, and next day. For instance, if you want same or one day, you want to be located at close-in industrial. However, if one-day or two-day is suitable, you’ll want to be close to the major package delivery hubs for a handoff to either Fedex, UPS, or USPS. Generally that means at least three to four warehouses in every quarter of the country and more depending on volume and penetration. So far large consumer product companies have been been taking most of the large chunks of space. But as the ecommerce wave is predicted to take off, smaller businesses will be also looking at expansion under the ecommerce model. 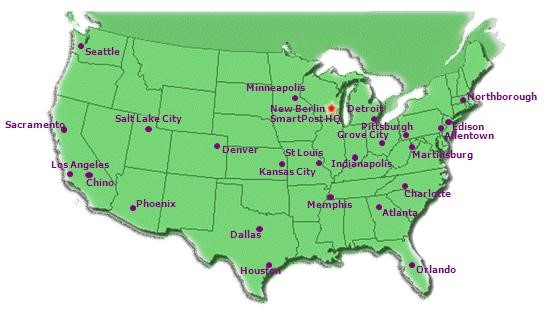 The Challenge of Space

For big box locations, there is still plenty of land to choose but some markets are lit up and pricing is substantially higher. Closer in areas are the most intense. There is a mixed consensus that demand will continue to hold up. Some forecasters are saying the activity we are seeing today is due to pent-up demand and that things will flatten from here because subpar GDP. In contrast, those in the field report no product and intense conditions. For example, in Los Angeles rents are up 25% and there is still only minimal new construction to meet the substantial demand. One example on the smaller side is there are no buildings under 25,000 SF that have both dock-hi and ground level. This is an essential configuration for distributors who take in goods and send them on small Sprinter vans for fast deliveries in congested areas.

Ecommerce could be a continual engine that creates steady pressure for new and more modern warehouses. If you follow the experts, ecommerce buildings need extra land for parking employee cars and containers; lots of loading doors; and high cube. For that type of site plan there are no existing buildings that fit this profile. The highest and best industrial use today is selling to a User at $160 per foot plus. It means the commensurate lease at a low 5% Cap would make the rent $.66N or $.85 Gross PSF/Mo and that doesn’t include the additional land that is required to serve the use. $1.00 to $1.10 all in could likely support the development cost of a good ecommerce building in the right location – if you can find the land. If, because of the shortage of available land, you were forced to go the teardown route, pricing goes up.

This is the challenge. The ideal ecommerce building is unfinaceable because of the above market rent. Some companies can use their balance sheet to finance ecommerce buildings. However, most ecommerce companies are newer without a long track record. If willing to use their cash, they can make a partial capital investment to effectively lower the land cost but this is not a first choice. While there is “best location” theory, the market strongly limits the occupier’s choices.

The science and math behind ecommerce is at an early stage. There have been several examples of both large and mid-size companies that have already gotten out in front but the reasons for their success are still being debated. Many others will be following with their own real estate footprint for rapid distribution methods directly to the consumer. Best retail locations will no longer be on the best shopping streets but also at the best industrial sites.