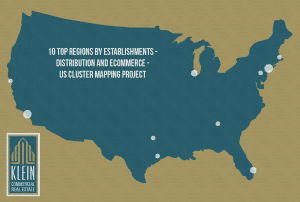 We’ve been examining some of the larger ecommerce distribution companies and while it is a very notable trend in the industry, we’re finding the current leasing impact is substantially less than the publicity it currently garners. But this is still early in the migration to a new distribution platform and a lack of building supply is holding back ecommerce adoption especially in infill markets. Ecommerce users generally want a lot of loading, high clearances, and large employee parking lots. These are not buildings typically found on the market and in this period of extreme shortage, there is no incentive for developers to develop anything “out of the box”. However, those few developers who have been willing to take the risk and build ecommerce buildings on spec have been richly rewarded.

There are some very large space users in the ecommerce realm. Many however are concurrently supplying their retail store network while at the same time fulfilling ecommerce customers, so the buildings are effectively doing double duty. Other ecommerce vendors rely on third party providers and in those cases, the ecommerce impact is hidden. Except for the very largest, the pure play ecommerce companies (website and warehouse) tend to start with major facilities in Southern California and New Jersey and build out the network from there. But overall, once you get below the top 10 or so, the next tier of ecommerce distributors have not yet made a visible impact. There’s a disconnect between so-called “generic” distribution space and the needs of ecommerce users – something that can be overcome by higher rents.

Often overlooked are great personal opportunities for closely held ecommerce businesses to purchase their own property. Fast growing companies in the ecommerce space are naturally putting money back into the business and for them real estate is a low yielding investment. But there’s a substantial coterie of closely-held, established business transitioning into ecommerce and these are businesses that can benefit by owning if for no other reason to create personal wealth. As the cycle continues and current tenant needs go unfilled, developers, who have the financing, are ramping up deliveries. Some developers clearly will sell but not all developers are the same. Some developers are aggregators and want to build up a mass portfolio with a distinct eye to public markets. Other developers are strictly fee driven and as they normally sell to institutions, they will also to an Occupier.

As I examine the larger ecommerce companies, they are winning market share by taking as much space in all the major metros as quickly as possible – but mostly in exurban markets where they can find the land. Or in the rare case, when an infill site become available, the Category Killer will pay up in rent to be close to customers. Meanwhile, the smaller players are more careful in weighing their options. Firstly, there are no suitable infill properties and because of legacy decisions, there is a hesitancy to “pick up and move” to hinterland locations. Depending on ownership structure, wealthy private businesses have a tendency to purchase but there is nothing that they can easily find. A few of the more creative private companies have purchased the property themselves, used their company as the tenant, and hired a 3PL to manage the property. With generous financing, the cash outlay has been relatively minimal, the rent, no higher, and the operation, seamless, depending on the 3PL operator selected.

Ecommerce is still in its infancy. Despite general development guidelines, most developers have been unwilling to spec a unique building while demand for traditional warehouses is so strong. Ecommerce tenants need to articulate what they want specifically while understanding the site design and building issues that make these buildings “above standard”. Likewise the commensurate rents will be also be “above standard”. As issues such as close-in location, extra car parking, loading docks, mechanical build-out and trailer storage become more widely understood, the conversation will quickly change from space scarcity to one of cost. And from one of warehousing, to a development of critical infrastructure.