Something new has been added to the industrial areas of Los Angeles. Campers and trailer homes are dotting the industrial streets and unfortunately they are becoming an eyesore and a nuisance. But more importantly they are driving tenants away from properties where the campers are parking. I have experienced this first hand.

Not that I am unsympathetic. Recently I talked with the owners of a couple of the better looking trailer homes. They were parked in front of a building that I am leasing where I took a few of the pictures you see. One of the drivers approached me and asked if I could help him out with money for a meal. When I told him that his presence drove away one of my tenants he started to describe his misfortune. Meanwhile one of the other drivers also came over.

Both were well spoken and told similar stories. They went from being homeowners and regular employees to being homeless and forced to live on the street. In fact they thought by living in a dilapidated camper they were better than most of their homeless peers. At one point, they parked in Venice where they could also enjoy a better climate. But they like many others in the border between Compton and Gardena were driven from the Beach Cities to an area where they are not bothered as often.

I explained that we had one of my buildings on Avalon leased but when the executives from Seoul came to see the space, he was immediately concerned that security for the project would be jeopardized by the rogue campers. It didn’t help when we saw someone preparing his meal on a grill he had dragged on the sidewalk. Based on what this executive said, it wasn’t just the security issue but the sheer indignation of how America lets it poor live on the streets. And to have the employees see it on a daily basis was too discouraging for morale.

I started to see these campers parking on the streets about three years ago. Just driving around the County Strip I counted 40 in a few block radius. I can’t say directly that crime has increased because of the campers but there has been a noticeable uptick in building vandalism. The most obvious is power being stripped from buildings

I’m not sure what is legal because in many cities overnight parking is prohibited. My guess is that occasionally the police come around to enforce the law but the campers just move to another spot and park as long as they can. It’s hard to be angry at the destitute when they are just trying to get by. And after the past few years, I know many other people who are on a slow descent down the economic ladder. Luckily they are just not as unfortunate.

But when the campers are causing me to lose deals for my owner customers, I would like to see that something is done. Perhaps the County or State has property where the campers can park? Meanwhile Homeless Services can also provide food, medical care, and a shower. Just driving them away does not seem to be a solution because the campers will park somewhere else. I’m going to ask County officials tonight at a local meeting and will report their response. 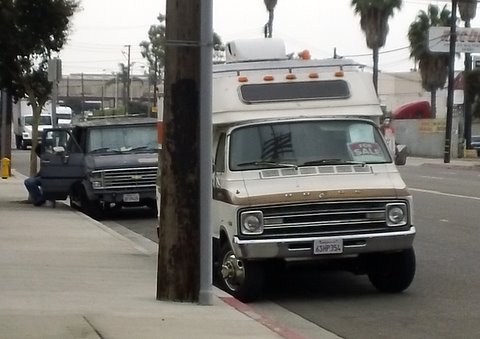